The Union Takes on a Moonlit Cowells

So this moonlight surf adventure at Cowells on March 11th is one that I credit Sarah Watters as being the inspiration for. She and I were talking the week before about surfing at night under a full moon when she revealed that she had never night surfed. Her excuse for never having surfed under a full moon had something to do with poor eyesight when it gets dark, and little faith that the moon would produce the light necessary for surf, not to mention the potential for unseen collisions. So I surfed into dark and the high tide the next night to see if she was right about the moonlight. (I knew she was wrong, I just wanted a reason to surf at night, as it had been years since the last time.) I performed the few calculations that my brain could muster and came up with the perfect conditions setting up for a full moon surf adventure at Cowells. The incoming tide would be about 1-2 feet past a minus tide with a fading swell from the NW (with a little south mixed in) right at about 6:30 to 7:00 p.m. The sun setting at 6:12 and moon rising about the same time would allow a paddle out in the twilight with the moon getting brighter as the sets roll in.

I passed the idea off to a couple of friends and got some positive feedback. In doing this, I also learned some other friends have never surfed at night. There was a good turnout at the tour cum social at the Natural History Museum on the 10th, and an announcement to surf under the full moon was made. Many a Santa Cruz Longboard Union member and initiate committed to showing up on the bluff above Cowells the next evening to paddle out en masse and share the glassy waves I knew would be waiting for us. Truth is, the wind could chop it all up, clouds could hamper the moon’s illumination, and maybe nobody would show up. Of course, I was in control of none of these things. What I could control was to go out on the Saturday morning of the 11th and surf my ass off before the tide got too high, just in case the full moon surf was a bust. Alas, I was not in control of that either, as I was locked out of my home (and surf gear) until late that morning when high tide washed out any hope of waves. I asked myself, should I take my old ass out and surf the dropping tide at The Lane and catch my usual lion’s share of waves and chance having the energy to surf Cowells as well?

My answer was no. I had a new 9’6” Michel Junod “Regular Old Noserider” model I was frothing to ride and I had a little more than a smidgen of faith that my club brothers and sisters would show up for this call to surf into the night.

I drove up to Cowells at about 5:30 and witnessed zootopia madness going on in the water once I was able to elbow my way into a parking space. My friend Jesse Katz showed up early as I let him know we would be there and he had commitments when it got dark. He was the first to paddle out. 6:00 came along and so did Don Iglesias with the rising of the moon. Surfers started to trickle in from left and right. Scotty Renfrew showed up on

the bluff, and then Bobby Visali walked up with glow sticks. Kim McCready and her husband Doug rode up on bikes to support from the cliff. (They couldn’t resist the pull of The Lane earlier in the day and were surfed out.) Prospective member Rebecca Mu showed up ready to surf and she invited her friend Lennon who has volunteered at Ride A Wave in the past. (Ricky from RAW was in the water too.) Sarah Watters wasn’t there as she was speeding down Hwy 17 at the time to get to the water before dark. Her boyfriend John Felps was there as were her friends and prospective members, Jennifer Krebs, Taryn and Andy Marse, and Taryn’s friend Heather. Keith Skaug came up from Cowells waterlogged and soggy just to say hi, and then he paddled back out for more surf. My friend from work, Ty Newcomb, arrived to surf at night, even though he is a beginner and hasn’t been able to hit the water for months. He had never night surfed and always wanted to. Maria Prendes drove by on West Cliff Drive as I was slipping into my wetsuit but she could not join us. Quinn Comer was slurping coffee on the cliff before going to get a longboard from home. (He already surfed The Lane, but that did not stop him from paddling out again. Oh, to be young again.) I found more SCLU clubbers in the water when I paddled by with a glow stick in my braid. I saw Frizzy paddle into a wave despite his pained shoulder, so I dropped in on him and switched stance so I could face him while we surfed. (If I ever find out who I almost ran over when backside surfing, I’ll apologize, I swear.) Niko Takaoka was present with a glowing something in her hair that matched mine, and a couple of Keikis in tow on body boards.

Most everybody who was surfing in the water prior to dark cleared out. The sky was as clear as it has ever been and the moon as bright a reflector as it could be. The water, which had a little wind shattering it when the sun was out, mellowed down to oiled glass. I looked around and saw familiar faces in every direction, and then had to spin and catch a wave because so many were coming through. The wave was about 2 and a half feet high and perfect. There was already someone on the wave and it was okay because it was my friend and we both got pushed out onto the shoulder. Oh, and did I mention, my new 9’6” Junod surfs like butter. Every time I paddled back there was a club member or initiate paddling for a wave and I got to hoot and holler them into waves. Don had a headlight on and looked like a locomotive coming down the line. His daughter Ily was there with her husband Chris. Ily said that her dad almost surfed over the top of her. Rebecca was on a wave with 3 other women, and managed to slide a foot off of her board and into Sarah’s leash loop, pitching Sarah forward as Rebecca fell back. (I got to hear about that story from both perspectives.) True, there was some bumping of rails, and a lot of sharing waves, but the stoke was off the charts and the few surfers out there who weren’t in the club were also having a blast. At one point early on in our adventure, I guessed that 75% of the surfers in the water were with the Union.

Now, I like to surf bigger waves, and I acknowledge that surfing is often a solo if not selfish sport, but the camaraderie I was a part of that night warmed my soul. Keith mentioned to me that when he had joined the Longboard Union years ago, he anticipated that he would be joining a group of like-minded people who would love to get together and surf. He said the club was not like that though, and that this was the pinnacle of that anticipation. He did mention a few names of club members who have that spirit of getting us together to do fun surf trips, and I silently agreed that we certainly need more time together in the water as a club. I know this because everybody was having a good time. I know this because I was having more fun enjoying everybody else’s surfing than I was enjoying the surf myself. And believe me, I was having fun surfing that night. I think there may have been more club members watching from the cliff and I’m sure there were more who couldn’t be there, but wished they were. As it was, we were over 20 SCLU longboarders deep on that night.

The club members trickled out of the water one by one, much the same as they trickled in. At some point Rebecca recalls that she smelled beer. At about the same time, I started hearing a lot of loud whooping and (harsh sounding) yelling. I noticed that there were more people in the water and there was a bit of an aggressive vibe. That’s when I noticed a surfer, then two, drinking beer. I paddled to the outside, where I would usually find our club members and I could only find John and Sarah. I realized that the night was over, and I was a little bummed. John was hungry and ready to paddle in, but Sarah wanted another wave, and she wanted a little peace and quiet to surf it in. She suggested we paddle away from the Beer Surfers and catch a couple of waves further up the cliff. That is how the evening ended: Watching Sarah snag a couple of higher tide waves off of inside Middle Peak, while I basked in the light of the moon on the shoulder, refusing to put my new board too close to harm’s way with no leash to protect the pristine fiberglass from the surfboard-eating cliff. It was 9:00 p.m. at the end of the night the Santa Cruz Longboard Union came together to surf Cowells and I was thinking that Sarah has no more excuses for moon surfing as we walked our longboards away from the surf statue dripping salt water on the path. 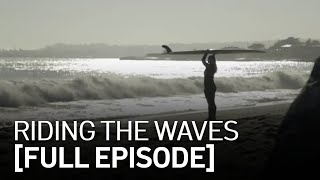